Glutathione and your liver

This post is dedicated to all my housemates who are asking about GLUTATHIONE. But I hope you (others, hihi) will also learn from this.

Drop me a message if you have questions: marnellereyes@gmail.com

See ya all housemates!!!

Back to the ball game.

This is not a "WANTED" post.
A few months ago, as I was browsing through the internet I came across a job opening for a cabin crew position. The Singapore Airlines was having a walk-in interview. I read all the requirements then I knew it was not for me because the applicant has to be a Singaporean or a Malaysian. But then I was not convinced. I researched the internet if SIA is accepting applicants from other nationalities. I found out that they are considering foreigners but I never saw "Filipino" as included. I proceeded, however, with completing the application form I downloaded online. I was crossing my fingers hoping that they would consider a Filipino.
Together with my overly excited sister, who was actually the master mind of the whole flight attendant career option, I went to the interview. I was wearing a black semi formal dress. Please see picture below.

It was something nearly like that dress. But not the blonde hair. So we went up to the 4th floor and saw the very expansive hall. I walked up straight to the receiving table passing through a section where smartly-dressed boys and girls wait around. I asked the lady at front desk if it was the walk in interview for SIA's cabin crew. She asked me if I signed up already. They handed me a blank application form and told me to fill it out. Oh, it was the same application form I downloaded and completed few days ago. I was so ready for it. :))) I told the lady that I have it already. She was about to give me the next instruction when she asked about my nationality. I told her that I am a Filipino. And the officers sitting were a bit dismayed (just as I was) to tell me that they were not hiring Filipinos. I got upset for 2o seconds then we left the hall. I said thanks to them. Thanks also to the adjacent hall where there was a SALE! We went there and spent some 30 minutes drooling because I dont have money. :))))
I related my experience with some of my friends and they think that it sounded a bit "racist". I researched further and found out that SIA accepts Singaporean, Malaysian, Indonesian, Japanese, Taiwanese, Korean, Chinese and Indians (Source: Ex-SIA CC blogger). Oh so no Filipinos... Ok so maybe next time I'll try again IF I get to marry a Singaporean. LOLs! JOKESSSSSS forever. I haven't checked if they accept PR (Singapore Permanent Resident). It doesn't matter, I'm not a PR anyway. :))))
-------------------------------
Remuneration & Service Benefits (Cabin Crew)
A monthly allowance will be provided during training. Upon graduation, you can look forward to a basic salary and various allowances amounting to about $3,500 a month. In addition, there is an annual wage supplement of one month’s basic salary and profit-sharing bonus. You will also be entitled to free travel to any SIA destination once a year and enjoy discounted travel at other times.
(www.singaporeair.com)
Wow right?? :))) That's why I kept telling myself that day, sana pwede sana pwede sana pwede pinoy. HAHA :)))
Well, good luck to others who'll pursue this career!!! :)
Posted by Aegis` at 1:29 PM 12 comments:

These are the lyrics of the songs (these will definitely be included in my album marnieandfriends, hahaha!) we composed for the battle:

The aim of course is not just to perform but to minister and so we chose somewhat evangelistic subjects in our songs.

While performing the first song..
The four wearing black are the judges, by the way.
Crush ko 'yung nasa rightmost :D DJ Jordan Escusa of NU107!

That's him with Kitchie Nadal.

Last May 23, 2009 I got myself into a compromise which turned out to be one exciting experience for keeps. Joanne Gonzales, who is a good friend of mine, was the one who got me into this. I did not realize that it was actually a real Battle of the Bands until I saw the flyers. When I first heard the invitation I thought of it as some jamming sessions like one of those hosted by their church. Ok, I said yes already. So, why not? The contest was sponsored by Christ the Living Stone Fellowship (CLSF) as one of their fund raising activites for church planting.

Anyway, we formed our banda-bandahan of 4 members. Originally, I got in as the bass guitarist; Melvin Louie Canilao as the lead guitarist, Jun Esguerra as the percussionist, and Joanne on keyboards and vocals. When Jo submitted our requirements, the coordinator was a bit shocked (as Jo related hehe) to know that we were only 4 plus the absence of a drummer boy. We've got someone to play the cajon for the beat. Ok. So, we thought of getting a drummer boy instead of having cajon for percussion. Jo contacted a friend called Jordan but sadly his schedules are tight and he cant stay out late. Ok. I actually decided to pursue an acoustic band until I checked once more my mobile's inbox and found Edward Doniego's name. That's it! Ed is a youth leader who I met in one of the generous camps in Iba, Zambales. At that time, their church was lead by Ptr Jhun Singson who was our previous resident pastor. In short, we got Ed as our drummer boy. As a result, we did a little role-switching in the band. And thanks due to the bad weather Ate Tin's (Christine Manzala) mission trip was postponed so she also joined us as keyboardist. Jun played the bass guitar while I got my hands on the acoustic guitar which I borrowed from Paulo Barrameda. And thanks to Clem Roxas' friend who charitably lent his bass guitar during rehearsals and on the day of the battle. We were nearly 10 days away from the competition and I was really apprehensive about it because we only got short time to rehearse and our schedules hardly coordinated. All songs were compositions. All songs were composed for solo performance so we had a hard time rehearsing them on a full-band basis. We had to rearrange some parts of the melody, lyrics, etc. 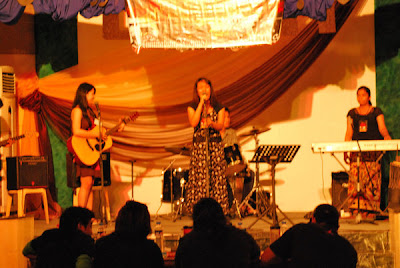 In Mathematics, the most popular and most sought after variable is the X variable. For some it is unknown but I believe it is the Answer. PLAY for CHRIST = PLAX, we are the PLAX band; and we PLAY for CHRIST.

There are times when I call out to

The one Who found me lost

And there are moments in my tired days

I fall and turned away

How could I not know You hearing me

At times when Im strayed

I believe it’s You who never fail

Go running after me

It’s the time I feel Im letting go of You

But You see me through my ups and downs

You spared all mercy, abounding grace

To find my way back to You

My hope relies on You

My rest inspired by You

My peace, my strength, my every all

You draw me back (so I sing this song of praise)

My joy depends on You

My comfort and my care

Lord thank you for not giving up,

You draw me back to You

And I wonder every moment of my life

How such love persists thru time

Everlasting, You amazed me